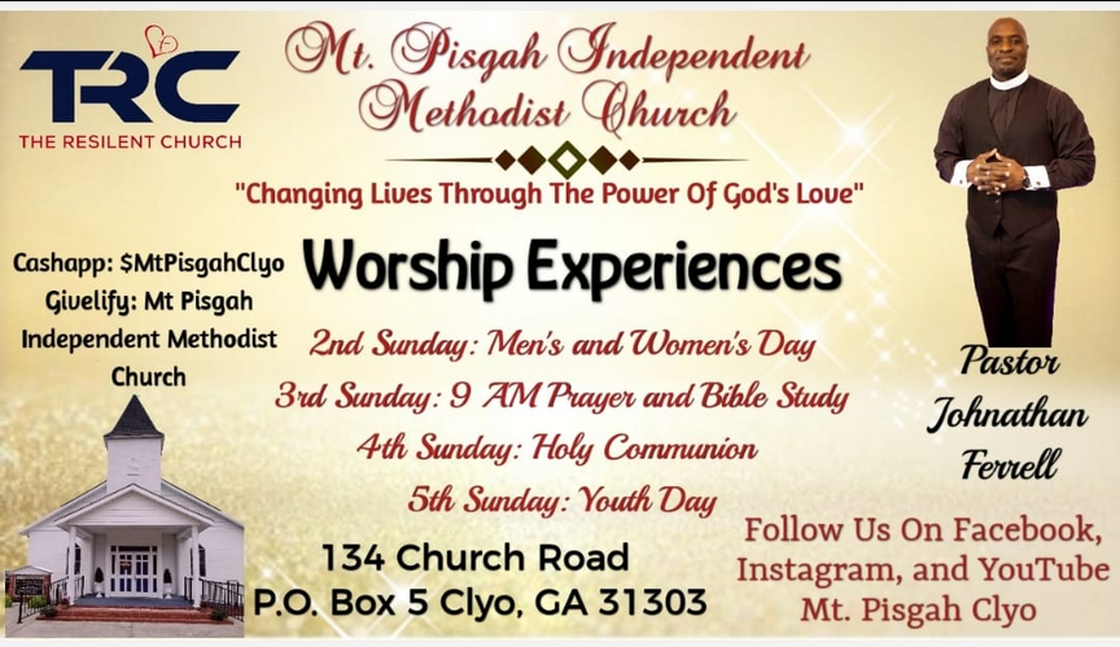 HISTORY
​Mt. Pisgah Independent Methodist Church was founded on October 1, 1983. Rev. Cassey Brown preached the inaugural sermon on October 23, 1983. Rev. S. E. Betterson was called as the acting pastor until December 1984. The Lord seeing his people needed a shepherd, brought forth Rev. Abraham Johnson, Jr. to guide the congregation from January 1985 to August 1990. Mt. Pisgah was deemed an historical site in Clyo, Effingham County, GA due to it's use as a voting poll.
​
On February 12, 1989, the church was destroyed by fire minutes before the Youth Day program was to start. Giving God the glory, all church members got out safely. With God's grace and mercy, the officers and our friends were able to rebuild the church in the same spot months later. A dedication service was held on July 9, 1989 with the Rev. Benjamin Burison, of Estill, SC, bringing the anointed word. Due to failing health, Rev. Johnson retired in August 1990.
​
Once again, the Lord saw fit to send another anointed shepherd, Rev. Clarence Spencer, to lead his people. Rev. Spencer served faithfully for the next 17 years (August 1990 to September 2007). Construction of the new social hall was begun on April 24, 1995 and completed on August 25, 1995. From September 26, 2009 to October 22, 2011, the church was under the blessed care of Rev. Chelsey Carter. The church was under the holy guidance and leadership of Pastor Lorenzo McDonald for the next 2 years (September 22, 2012 to August 23, 2015).
​
On September 13, 2015 guided by the Holy Ghost, Elder Johnathan Ferrell, Sr. became the anointed shepherd at Mt. Pisgah I.M.C.. Elder Ferrell brought with him  his love of God & the Bible wanting to renew, restore & refresh the souls of the Lord's people. Proverbs 29:18:  Where there is no prophetic vision the people cast off restraint, but blessed is he who keeps the law.  Lead Lady Melissa and their three sons Johnathan, Jr., Joshua & Jaylen Ferrell also joined Elder Ferrell in the ministry.