August 1750 -- The slave ban is repealed and is targeted toward African men, women and children. Georgia slavery upon The African people became legal.
1.   1733 James Oglethorpe arrives o Then North American shore in South Carolina with 37 families from Europe
​2.  1733 James Oglethorpe arrives near Savannah, Ga in Yamacraw to survey the area
3.  Slaves and Rum prohibited: Colonists tried hard to build Georgia without the assistance of African people
4.  European Colonists soon realized that their success and future was, inextricably, tied and depended upon the invaluable services
​     provided by the blood, sweat, tears, breath and life of African People
(a 400-year mortgage in blood and life and we received "nothing.")

​** Oglethorpe gave-in and broke his own rules and utilized African labor to clear out the land to build Savannah.
** July 23, 1743 James E. Oglethorpe leaves Georgia, never to return.
General James Edward Oglethorpe of England arrived on North American shores on August yy, 1732. A two-month voyage that consisted of 37 families of approximately 114 persons began their journey from England on July yy, 1732. Among this group were the Salzburgers of Germany.

Their first stop was in South Carolina. From there Gen. Oglethorpe surveyed the land which would soon become Savannah, Ga. On August yy, 1732 the settlers left South Carolina went arrived in the Georgia territory known as Yamacraw.
Oglethorpe put a ban on three things:

1. No Negro Slaves
2. No Rum
3. No Catholics
Gen. Oglethorpe maintained that he did not believe in slavery and the slave system was harmful to both the slave and the slave owner.

Gen. Oglethorpe prohibited use of Rum (spirits) because.

Clearing the new Georgia territory of trees, brush, rocks proved to a difficult task utilizing the sole labor of  the colonists. Gen. Oglethorpe realized that the African people would become invaluable to the establishment of Georgia, beginning with Savannah. On November 1732 Gen Oglethorpe rented or leased African slaves from neighboring South Carolina, despite the current ban against Africans in Georgia, which he himself created.

​History is proving that so-called Black men, women and children are as much rooted into the fabric of not only the State of Georgia but also the nation as a whole. An entire class of human beings who committed no criminal offense were placed in chains and forced to labor day and night clearing the land of trees, snakes, brush. This prison labor camp ran by Gen. Oglethorpe, as Georgia Warden, created what we now know as Savannah. Innocent, yet inmates providence at this critical moment has recorded their inner prayers, their toil, their agony caused by this gross injustice.
Savannah, a Masterpiece

Twenty-two city squares were layed-out with precision. The corner stone to Georgia had been completed and it was beautiful. 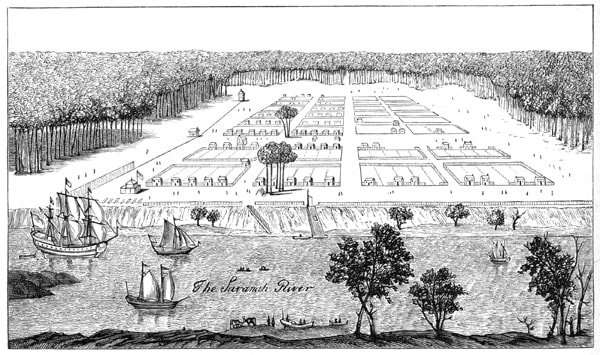 After the invaluable service provided by the African people to help build Savannah was done, Gen. Oglethorpe once again remembered his ban against having Black people in Georgia. He then had them returned to South Carolina without pay, without recognition, without any type of honor for their blood, sweat and tears. Their sacrifice made to the "White" Georgians in the building of Savannah and to the Colony of Georgia would not be memorialized by Gen. Oglethorpe. The Africans would be denied the opportunity of enjoying any of the fruits of "their" labor. The sweet nectar of African prison labor would enjoyed by others for centuries to come. Their African lives did not matter.
1745 Oglethorpe Left Georgia, Returned To England